A group of resident assistants criticized Western Carolina University for being “aroused” after being subjected to mandatory racial and sexual sensitivity training where they were told not to label America ” melting pot “.

During the training classes, RAs were shown a series of slides telling them to avoid using certain phrases when working at the North Carolina school and were shown a “gender unicorn” to put on. highlight transgender identities.

In one example, they were told to stop talking about America as a “melting pot” because it emphasized the idea that people should assimilate into the “mainstream” culture of America. country.

â€œIt really pisses me off to see how what should be one of the top leadership positions on campus, being an RA, has been hijacked by arousal,â€ one of the students told Fox News.

“I took the job because I wanted to help people with their college experience, not to be told that men and women don’t exist and that everyone has their own gender unicorn.”

As part of the training, the group learned the type of language to avoid in race-sensitive environments, as well as a graphic illustrating concepts related to gender identity and expression.

In the presentation, one of the slides dealt with language that might be considered offensive to someone of a different race.

They were told not to use phrases like â€œWhen I look at you I don’t see any colorâ€ and â€œGender (or race) doesn’t affect the way I treat you,â€ as this negates experiences. of people with different identities.

The school also has separate RA support spaces – one of which is designated for blacks, natives or people of color, while another is referred to as a ‘general’ support space. 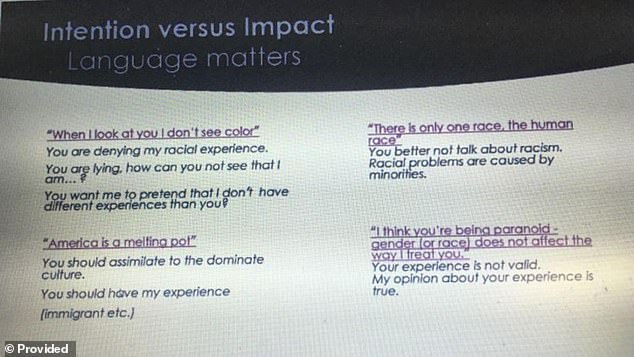 In one of the presentations, ARs were taught phrases to avoid using to people of different races that might be considered offensive. 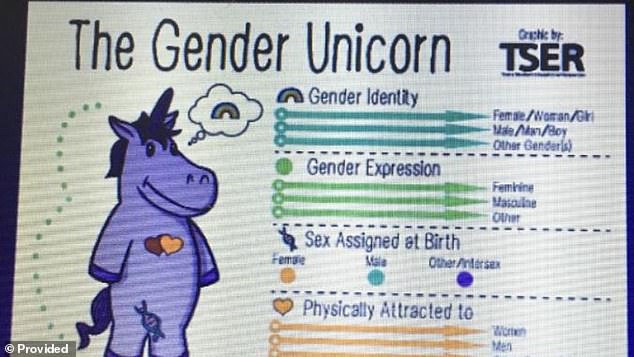 They were also briefed on the concepts of gender expression and identity using a â€œGender Unicornâ€ graphic.

As part of the racial discussion in the presentation, one of the black presenters spoke about his fear of stopping his car in northern Georgia because of his race.

This led to the topic of Post Traumatic Slavery Disorder which is linked to concepts of a racial group’s past experience with slavery and its relationship to their modern oppression.

A presentation on gender expression and identity was also given using a â€œGender Unicornâ€ graphic.

The slide also introduced the difference between sex and gender which one presenter said did not involve the genitals.

The same presenter also mocked a conservative part of North Carolina and said members of the LGBTQ + community should feel unsafe there.

Students who work in the school’s RAs have since criticized the training courses, with one saying the gender awareness course went against their personal beliefs.

â€œThe Rainbow 101 course goes against my beliefs, but I have to be in this course or I could possibly be fired,â€ the student also told the network. â€œI don’t have the right to speak out against this. ”

This incident is not the first time that the institution has received a backlash for its â€œawakeâ€ approach. 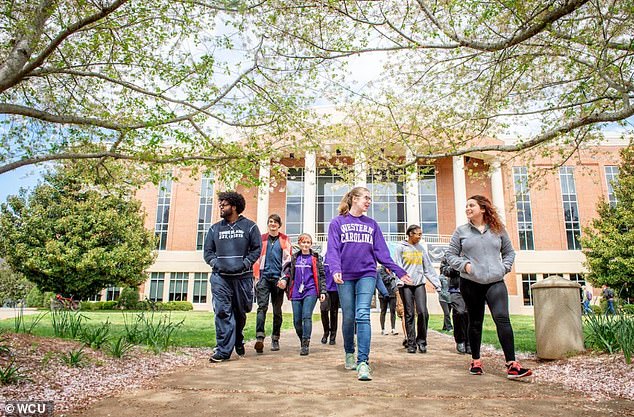 In April, RAs were previously told to avoid using â€œChristmasâ€ and â€œEasterâ€ in conversations with residents because not everyone celebrated the holiday.

They were also reminded of the â€œinclusiveâ€ nature of the school throughout the presentation to avoid offending any of the students.

Despite kudos for these statements, WCU is said to have no prohibited religious terminology on campus.

â€œThis was a conversation between trainee RAs and a housing coordinator, which simply suggested that we should consider that not everyone observes the same religious holidays, so we need to include everyone,â€ he said. WCU spokesman Marlon Morgan told Fox News.

‘That was all. WCU has not banned any religious terminology, and we have no policy to that effect.

It was also revealed that WCU has tampon dispensers installed in men’s restrooms for use by transgender students who have been criticized for wasting money and resources.

A student recorded the vending machine’s presence in the toilet and posted it on social media in November.

â€œI, with the majority of the student body, think this is an absolute waste of our resources,â€ the student told Fox.

“The school is not showing any initiative to show how much of our money has been spent on items like this and that bothers me a lot.”

“We believe that the forced need to be so ‘inclusive’ on campus is hindering real progress that can be made in other areas that can actually have a positive change.”