NAVAL BASE YOKOSUKA, Japan – The USO recently recognized 14 individuals from the U.S. and Japanese service branches for their community service in Japan last year.

More than 40 people gathered at the Yokosuka Naval Base Officers’ Club for USO Japan’s 14e Annual Tribute to Service Awards.

The awards celebrate service members who not only excel in their careers, but who also contribute significantly to their communities. Applicants are selected based on a variety of criteria, including professional development, personal achievement, leadership and volunteerism.

“It is a great testament to your commitment to excellence, your exceptional leadership and your selfless dedication to service to others that you are here tonight with us,” USO Area Director Natalie Rowland said at the ceremony. . 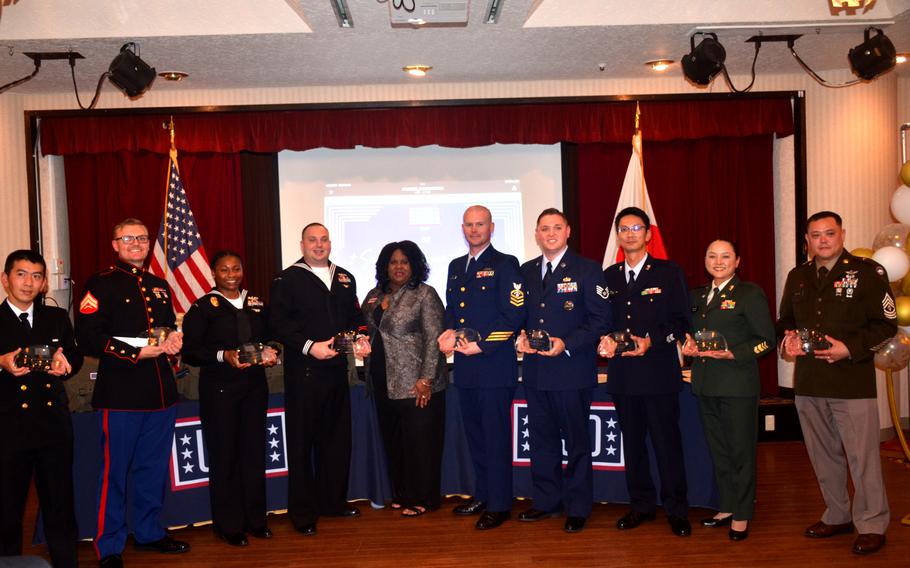 Typical among the honorees was the Japan Ground Self-Defense Force Master Sergeant. Takako Sasaki, 50, from Aomori. Sasaki was nominated for volunteering in various cleanup projects and working as a mental health counselor.

It was an honor to receive the award, she told Stars and Stripes after the ceremony, and she hopes the other volunteers who have worked with her also share the credit.

All U.S. military bases in Japan except those in Okinawa, and every branch of the Japan Self-Defense Forces were represented at the ceremony.

Burdick, 21, of Lake Forest, Calif., was recognized for his contributions to Camp Fuji’s recreational facilities, including the USO lounge and base chapel. A staff shortage left the two facilities without much support, so he stepped in for maintenance duties, he said.

“I feel very honored and I feel appreciated by the command,” he told Stars and Stripes after the ceremony. “And I’m very honored that someone sees the work you do and decides to reward you.”

“We thank you for standing with our U.S. military service members as we come together to protect and serve the Indo-Pacific region together from harm, building a secure future for generations to come,” Rowland said. to the Japanese laureates at the ceremony. “Thank you for your lasting friendship.”